Not yet, but they shouldn't be far away!
Top

Probably be this week I would imagine.

Current indications for the first half of July point towards often dry and settled conditions over the UK with some decent periods of summery weather. The reason for this outlook is that an area of high pressure is likely to be often somewhere near, or over, the UK, keeping rain-bearing low pressure areas well to the south and north of the country. Overall, temperatures are expected to be slightly above the seasonal average over the UK with rainfall amounts probably below normal. Indeed, the lack of rainfall could start to become a concern for gardeners. There should also be a lack of windy days. However, the exact positioning of any high pressure areas will dictate the day to day temperatures. High pressure would occasionally be expected to move away westwards to allow a few breezier and cooler episodes of weather to develop in what is expected to be an often warm and dry spell. However, there is also the chance that high pressure occasionally sits overhead or just east of the UK to bring a few hot days at times.
Top

Don't be pedantic BC, you know what BMrider meant

My envelope arrived today as well. 18 days to go...
Top

If the MiG and Flanker fly before 1500 I'll be there!
http://www.flickr.com/gravityxgrace
https://jakedaltonaviation.portfoliobox.net/
Top

That's the new name for the main beer tent this year - the "Mig and Flanker" bar!

If BC drinks much of his cider, then he'll be lucky to manage a semi on Wednesday evening.

If BC drinks much of his cider, then he'll be lucky to manage a semi on Wednesday evening.

Like the Welsh attack..a bit on the limp side

Nope.
Don't like football.....wouldn't watch it if Wales were involved either.
Strange as it may seem to some, football isn't as popular as the media try to make out.
Now if they put some decent ( as in, not F1 ) motorsports coverage on it would be a different matter.

Big Eric wrote:If BC drinks much of his cider...

I may have to start with the beer, as that's what my cool-box is full of at the moment.
Tôi chỉ đặt cái này ở đây để giữ cho người điều hành bận rộn
아직도 숨어있다
Top

Just got back from another enjoyable stay at Kempsford. Thanks to the team for looking after us. Will miss those Pizzas and it’s back to Belvita & yogurt for breakfast now.

Does anyone know Colin Pratt? He posts on here as Geezer100. He was booked in at Kempsford but didn’t make it. That was very unusual as he's a regular. Not responded to texts either. Any info would be appreciated.
Top

I don't know Colin Pratt, but I had a lot of fun with the guys that had a 6 foot high cardboard cut-out of their mate that couldn't make it this year. His name is James and he couldn't go because he became a dad for the 1st time last week after 10 consecutive years of attending Kempsford!

Did anyone else see him? 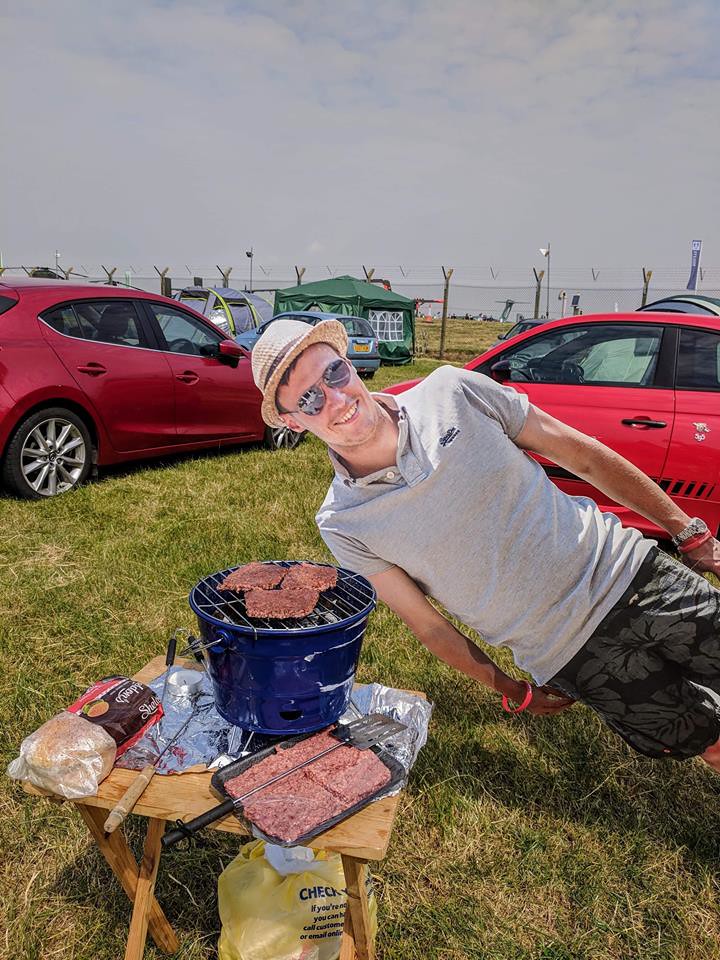 Yes, I saw 'James' a few times. He was very much enjoying the band on Friday night and was very good at crowd surfing I noticed.

Well, Kempsford felt a bit different this year. The site itself was the same as ever, and its always good to catch up with the familiar faces around the place. The overhaul in the catering fell a bit short though. A fish and chip van, pizza van and Mexican van were all great choices if on a day out, but on a Wednesday to Monday stay I ran out of options very quickly. I felt myself looking at the corner of the tent and wishing the three pans would make a reappearance. Only one band night too, although the match did provide entertainment and atmosphere on Wednesday night. Just lacked a little of the buzz this year.

Still good, and still miss it in my post event blues

its time to kick the tyres and light the fires

I did notice quite a few empty pitches in the top field ( and that's before a number of people left on the Saturday evening )
There also appeared to be a number of freeloaders on the Sunday ( there may have been some on other days, but I didn't notice them ) who cycled in, hung around for a couple of hours then cycled back out again.
And not strictly campsite-related, but when I left on Sunday evening there were quite a few cars parked-up at the top of the lane near the site entrance....surprised these weren't move on.
Tôi chỉ đặt cái này ở đây để giữ cho người điều hành bận rộn
아직도 숨어있다
Top

I noticed the empty pitches too. I've also eaten a hell of a lot of chips over the last week. I'm sure I'll be back next year.
http://www.flickr.com/gravityxgrace
https://jakedaltonaviation.portfoliobox.net/
Top

I was also surprised by the number of empty pitches at Kempsford, especially given how early the site "sold out" this year. Generally a pleasant experience (as always) though I too would prefer a return to the old catering arrangements.
nothing is confirmed at a show until its u/c hits the tarmac or it is running in for its display.....
Top

Much preferred Kempsford this year as over previous years. I preferred the new caterers and found the whole campsite atmosphere to be a bit more 'family friendly' for want of a better term. Previously i've been kept awake by music and rowdy behaviour. I know I probably sound like a spoilsport - and maybe I am - but for me, it was just an all round more enjoyable experience this year.
Top
Post Reply
109 posts