655 MaPS [Vulcan at Wellesbourne] are thinking about holding a daylight/twilight photo shoot to celebrate the 50th anniversary of 655 being delivered to the RAF in November. They are keen to make it successful so would like to gauge if there would be sufficient interest.

The a/c would be pulled away from her normal base towards the closed taxiway to give an uncluttered backdrop.
Last edited by DeltaPapa on Mon 28 Jul 2014, 11:42 am, edited 1 time in total.
Top

So is this about the Vulcan at Wellesbourne Mountford?
Over 300 free things to do in London
http://www.toplondondaysout.co.uk
Top

Yes it is - a great bunch of guys who look after 655 very well.
Top

Very interested sounds an excellent idea as long as they they have good lighting, which they will need seeing as its such a big aircraft...
Top 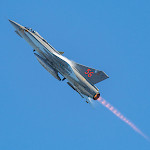 Probably be prepared to pay around £30 to £40 for this, as it's only one aircraft, and a big one at that, so space around her shouldn't be too much of an issue, but appreciate that equipment may have to be hired and 655 MaPS still have to make some money out of it.

Wellesbourne's quite a trek for me too, but '655 is probably my closest Vulcan, apart from XL318 at Hendon which I'll probably never get the chance to shoot at a nightshoot.
"I have a good pilot and a safe pilot."

) buy a coffee and snack (if put on by team) and talking about £50 for the night. I give to 655 anyway but think price has got to be aimed right, could you do a bonfire the same night, maybe get a few locals to come?
Top

I live just up the road so I would pay £5 and bring my torch.

on a serious note it's a great idea and advertised well it should be a good event.
Top

Happy to pay between £30 to £40 for this as its likely to be my only chance to photo a Vulcan at night, however for the money I would expect the aircraft to be electrically live on the night with all lights on etc clearly the engines would not be running but no reason why covers could not be removed, would be looking for a set up as if it was getting ready to go out flying (I know in reality its not a flyer).
2004 bathroom window photographer of the year

It's a good 320 mile round trip for me from Colchester, which in a gas guzzling S-Max equates to about £80...

so I'd say about £20-25 for a ticket for me to consider it viable - and even then it would only be if I got another 2-3 people to split the fuel costs with if I am honest.

Shame, as the chance to shoot a Vulcan lit up at night would be very good...

Love that everyone has come up with the concept of this being a night shoot.

DeltaPapa wrote: are thinking about holding a daylight/twilight photo shoot

I'm not involved in any planning I just agreed to put out feelers so can't comment but make your thoughts known 655 MaPS will take it on board they come to a decision.
Top

Even if it is Daylight/Twilight Shoot, I think it would be a braver man than me that has no contingency for lighting in November! Yes I have seen blue sky from dawn 'til dusk but I've also seen it never really get light over the whole day in November. There is clearly an appetite for a full-on night-shoot, so budget to provide full-on set lighting for the evening & your daylight 'insurance' costs are covered?? Try & snag some period vehicles to go with your Ground Equipment & punters have the chance to shoot 'clean' or 'staged' at various times throughout. A few re-enactors or suitably attired members of the organisation could also pitch-in? This adds value & variety to a single airframe shoot. (follow the East Kirkby model) HTH.
Top

I love that everyone's fuel costs are expected to be relevant to what the organisers can hope to charge for this...
Eccentric, idealistic, and creative, sometimes to the point of delusion..
Top

This is just down the road for me and wings and wheels event is always a good day out. Might be slightly optimisic and say would be nice to see maybe one or two other airframes (whirlwind, jp, classic air force?)

although this would bump up the cost a bit I bet.
Top

There is currently a scoping application for the potential redevelopment of Wellesbourne Airfield, please submit your comments saying if you object to the development or not.