Nimrod R1 XW666 Ditched into the sea at Moray Firth after an engine fire on 15th of May 1995. Crew survived.
Wreckage fished out of the sea - preserved at AeroVenture, South Yorkshire Aircraft Museum.
http://www.aeroventure.org.uk/xw666.php

http://lazarus.elte.hu/hun/dolgozo/varga/tokol.gif
In the Cold-War Era it was the homebase of the Soviet AF 515.iap.
(Pomeranskiy ordena B.Hmelnyckovo IAP) 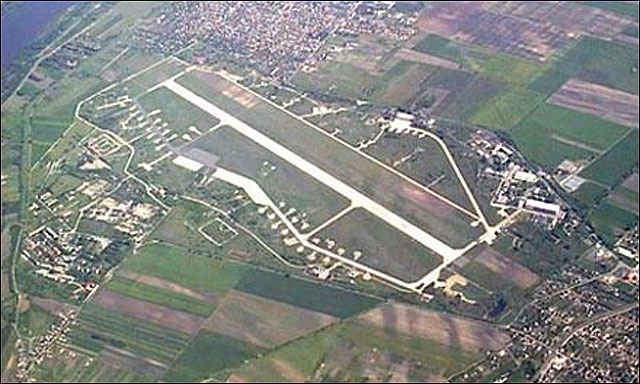 The last time I saw XW666 it was making a big splash off the coast of Lossiemouth, while it was attemting the emergency landing. Yip saw it with my own eyes totally surreal at the time but the 2 SAR helos from Lossie were on the scene fairly quick and everyone lived to tell the tale

Another useless piece of info regarding that incident was that my mate's "Chip Bag" hat was on the a/c when it went down, luckily he wasn't. The a/c captain Flt Lt Art Stavey I think was based at Waddington and he came up to Kinloss to carry out this shake down flight then ferry it back to Waddo. He forgot to pack his hat as part of his uniform and my mate leant him his for his duration of stay at Kinloss, that hat is now lying at the bottom of the Moray Firth unless it came up with the wreckage?
Top

This is what's left of it at Aeroventure Doncaster;

Another deployment to Hungary, XW666 at Tököl AB, April 1994

As I look at this thread, sitting in front of me is the photo I took of Rescue 137 winching the crew out of the multiseat dinghy with the aircraft (minus it's tail by then) floating nearby. R.137 was drum winching just of the coast when the aircraft ditched. They were on scene within 2 minutes I believe. On board were two visiting Spanish SAR pilots who had arrived on the flight that morning! One had a video camera and actually filmed the Nimrod ditching and the crews recovery. The film was used at the subsequent board of inquiry. Cracking start to their week at Lossie.

I was the winchman on the second aircraft, Rescue 138 which when the Nimrod ditched was coming back from Inverness with just the pilots on board. ATC wanted him to hold west of Lossie but the captain ignored them, landed picked me and the winchop up and departed for the scene. At the time we thought it was a fully crewed Kipper fleet Nimrod (14-15 on board). Fortunately as we found out there was only seven and R.137 winched all of them. In the end I took a pile of photos with the aircraft camera (the one I have won that years annual 18Grp photographic competition), then we picked up 137's drum! A busy morning.

Unfortunately I don't have a scanner so can't post the photo.

Was that the Yellow a/c you were in then or the Grey one. The one with the casualties landed on Alpha hard or I'm I gettting mixed up with the Jag that ditched in later years.
Top

I was in the yellow one. The grey Falklands cab did the winching. I don,t know where they landed with the caualties but was surmise it would have been on the main pan to be closer to the medical centre. Art Stacey I know was transferred to Dr. Grays in Elgin. We stayed out there until the remain fuselarge sank.

We have the pilots seat fully restored and on display at the museum...highland aviation museum...sorry the web site is down at the moment.
Hugh.
Very low and Fast!!!
Top

seen it ones at Wyton, taking off together with the two other Nimrod R1's
so all three in one shot

What's the date of those shots, RF?
They sowed the wind, and now they are going to reap the whirlwind.

We must have stand next to each other that day! I remember that day like yesterday. Being on my first trip to England it was a nice surprise to see them all three flying together that day...I also remember the truck load of Canberra's flying that day!

Can you spot yourselves at the fence?

What we saw that day was remarkable: 51 Sqn never flew 3 Nimrods together. The Canberra activity was normal for that time, however. And which one of you two gentlemen is Swiss? I seem to recall meeting you on the station earlier that day. It was a lifetime ago, though!
They sowed the wind, and now they are going to reap the whirlwind.

Mister Tee wrote:I was in the yellow one. The grey Falklands cab did the winching.

Just a long shot but do you remember the Tail Numbers of the 2 Choppers?
I am planning to recreate the scene of your very photo, using an Airfix Nimrod and 2 Seakings
If it doesn't seem to disrespectful that is.
Top

The grey Falklands cab (the one that winched the crew) is XZ586 and the yellow cab is XZ598. No codes were carried in those days.

Why should it be disrespectful. No-one died in the incident. A good job was done by all from the ditching by Art Stacey to the winching by Nicky's crew. No you go for it and I would be interested to see the finished diaorama.
Top

Would any Squadron Markings have been carried or are these also a latter addition?
Also would XZ586 have a large or small roundels and all images of Falkland Sea Kins I have found have an S on the side would this have been removed when it returned to the UK?

From memory the Grey Sea King carried the 78 Sqn crest and the letter S in Black on the cabin door and opposite side, I also think it had the Red/Blue lower viz roundel . The Yellow a/c would've had the 202 Sqn crest.

When in the UK not all of the grey aircraft carried 78Sqn. marks. I have a photo of ZA105 in Feb 1990 without the marks.All carried the 'S' as mentioned, itt was also carried on the nose. I also have a photo of the nose of a grey Sea King with RAF Rescue in white and RAF Sea King Training Unit badge painted on. Unfortunately I don't have the serial or where it was taken but suspect it was early 1990.
Top

The letter was carried on the door when i was in the falklands in 1985 as shown here.

Found this pic a few days ago.

Great Thank you guys, I'll be finishing my current project

then i shall move on to this, the Sea Kings and "Water" is already on order and should arrive soon
Top

Why was the Nimrod visiting Hungary?