We're looking at visiting MAKS next year - I'd appreciate it if anyone that has attended previous shows could advise on transport, links, accommodation (we fancy a couple of days in Moscow to do the sights), and anything else we ought to know.

Thanks in advance.
Turn 'n'burn!
Top

Hi! I went to MAKS 2007 and it was absolutely incredible

You are going to have a blast. I would recommend more than a few extra days in Moscow though. Its an amazing place. I would also recommend trying to get some tickets to the trade days. The public days are complete mayhem. You can see some of the photos I took in 2007 here:

I've been to every MAKS since 1993 - and to Moscow, Gelendzhik etc in the intervening years

I have always been with an organised aviation tour group - in my case George Pick Aerotours.

I don't think I'd try to go alone - without any Russian-speaking escort - it just isn't worth the hassle.

For starters you need a Russian Visa - and to get that you need a 'sponsor' - although there are organisations that will get one for you.

I agree with Chris about Trade tickets - the public days are full of Russians !!!!! and it is absolute mayhem.

It has been getting 'worse' since 1993 - in those days they didn't have much disposable income, these days they do - and they visit the airshow in droves.

I love 'em to bits - but I just wish they wouldn't keep getting in front of the aircraft when I am taking a piccy!!!

You can see my trip reports Here- although the ones prior to 2004 have missing links wot I need to fix......

Let me know if you need any more info...

I would suspect that's always likely at an airshow in Russia...
Top

I would suspect that's always likely at an airshow in Russia...

Now they do - and turn up in their tens of thousands.

And theyr'e not disciplined. We arrive early, get a slot at the front ready to take piccies, the public arrives later and pushes in front of us.

Then there's the static - you line up for a decent shot and there's young Igor posing in front of the machine to have his photo taken.

So you wait patiently until theyre done, but he then gets replaced by sister Natasha, then granny Olga and mum Irina.

Not only do they get in front of the aircraft, they actually climb all over it if there's no-one to stop them!!

I remember wincing as a girl in high-heels tried to climb into a restored Po-2!!!

At MAKS 2005, the Americans attended in force - F-15s & B-1's over Zhukovsky!! We wanted to to talk to the crews on the static displays - mainly to take the p*ss, but couldn't get near for the hundreds of Muscovites asking for autographs!!!!

It does have its compensations though...... 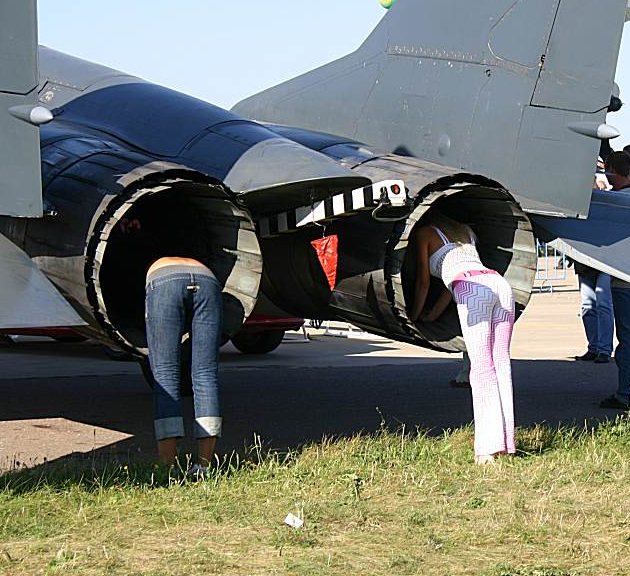 Hi all, looking at going through the Ian Allan Aviation tours but just woundering if any infomation is around as too what will display this year? Thanks, Ryan.
Top

I got an email today confirming press accreditation and a visa invite. Are there others planning to go this MAKS this year? Any advice on hotels greatly appreciated. Thanks

TLM wrote:I got an email today confirming press accreditation and a visa invite. Are there others planning to go this MAKS this year? Any advice on hotels greatly appreciated. Thanks

Also interested in any hotel recommends for this show and transportation costs/arrangements?
Top

Yep, 4 of us going over for this

Travelling Business Class with BMI, should be fun.

Travel? Well from Domodedovo to the hotel will be via train and metro, then travel to and from the show more than likely by Taxi or bus.
Top
Post Reply
9 posts • Page 1 of 1