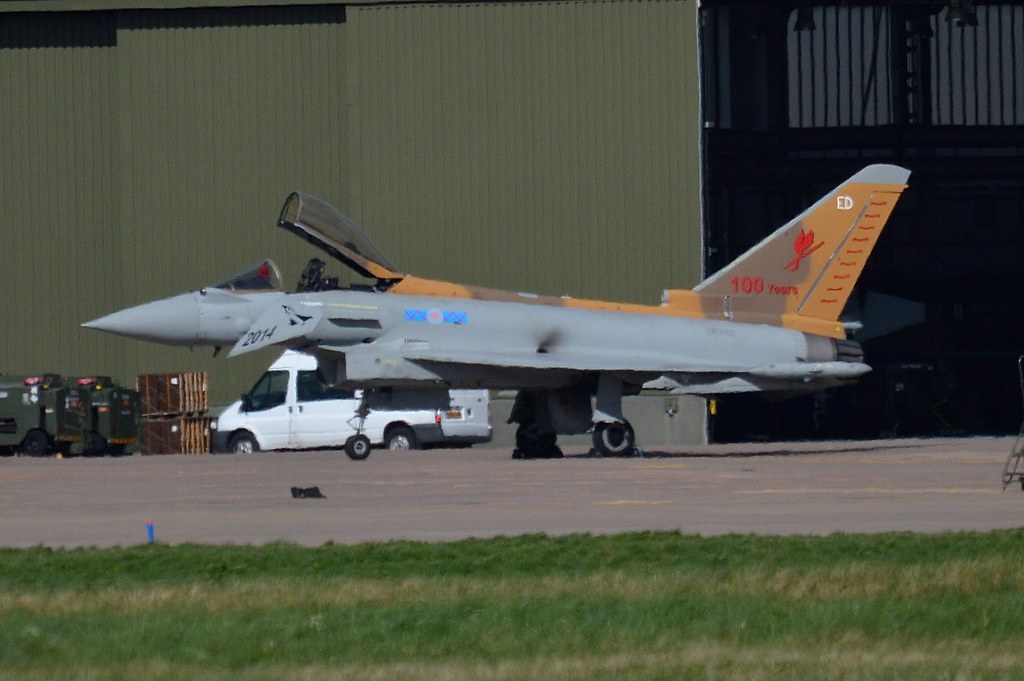 As special schemes from the RAF go, that isn't half bad imo.

Another woeful scheme & what's going on with the canards again?...

The canards are supposed to have all the past aircraft, the scheme is desert camo from when they served in africa busting tanks. Hence why they are called can openers
http://www.flickr.com/photos/95487407@N04/
Top

It's a very smart scheme I think, not a fan of the canards though.

FreddieKempton wrote:The canards are supposed to have all the past aircraft, the scheme is desert camo from when they served in africa busting tanks. Hence why they are called can openers

I realize the history of 6 Squadron & it's a nice touch the sand camo, but they should have left the canards alone same as the 29 Sqdn display jet. There is a lot of heat-haze on your shot so it may look better in the flesh...

I like the background scheme, a nice touch. Just feel the badge and 100 years could have been presented in a more tasteful manner - a shield would have looked better?

Look forward to seeing it at Waddo and Fairford.

markhodson wrote:My humble opinion is it would look a lot better with all the grey on the tail covered

All, even foreign, Typhoon schemes have the tip of the tail and the leading edge of the tail grey so it would appear that those surfaces aren't allowed to be painted.
http://www.twitter.com/chrsmlnephotog
http://www.facebook.com/chrismilnephotography
Top

Very tasteful colour scheme, nice to see the desert camo extend down the spine. Not sure what to make of the canards but a good job overall!
"FuelMan, SpamCan, NoPlan, CivviMan, DroneMan Dan"

I'm with you on that - looks horrible to me. Very disappointing

All or nothing. Surely they could have painted it in desert scheme as per last year's Tucano. Instead of just a little bit of desert scheme? Would look a lot better IMO.

I trust no one, not even myself! Josef Stalin
Top

Hate the canards. The rest is OK.

I thought the display aircraft looked okay, but this is just "tacky"...
Facebook
Top

The man hours that went in to this by the chaps in the RAF Leuchars Paint Shop, the struggle to keep to the rules, the artistic challenges that went in to keeping everyone happy in every section/rank and the many opinions that are in the RAF as well as on the forums - I applaud all on No 6 Squadron for sparing the time to get this project completed. Love it or hate it - GREAT effort! Have a wonderful Centenary Weekend!

Much preferred the old azure tailed Jag but I guess given tightening of rules and restricted budgets the days of the old 13 sqn jet or the Goldstar Tornado are behind us. With that in mind well done to 6 sqn for doing it, they've pushed the boat out and hopefully there are elements of the design that can be worked with and improved on for future efforts. It might not be spot on, but at least we're starting to see Typhoons with anniversary markings after years of nothing but grey jets.
Top

It's quite nice IMO.

Titles on the tail would have looked better in black, and sand camo under the canard decals would have finished the look slightly better, but by the standard of some recent schemes it's decent effort.
"You really are an oafish philistine at times!"
Top

Superb efforts there looks great take them back to the Tankbuster Hurricanes of WWII, Trumped this years display Typhoon !

Thanks for posting the pictures Gill. Maybe I was a bit harsh on my first post, looks a lot better close up, still think the canards are an after-thought though.

But you've got to thank 6 Squadron for making the effort to paint up a jet & hope they have a great Centenary Weekend...

I think, considering the continual budget cuts and strains on all our armed forces, the fact that 6, and 29, even bothered to apply special schemes to their aircraft should be applauded. They haven't done it for our benefit and if I were somebody that had taken the time to help design/paint and then read this feedback I'd be disappointed by the lack of support. If the vast number of armchair critics here think they can do better then go buy yourselves an aircraft and do it. In the meantime I'm just happy the RAF has bothered.
Loafer for Mr. Da Vinci.
Top
Post Reply
37 posts