I’ve used the Laowa 9mm f/2.8 Zero-D Ultra-Wide Angle Lens, attached to a Sony a6500 camera, on a few night shoots but wasn’t impressed with what I came away with. A bit hit and miss with some images spot on and others soft/blurred, too dark or only suitable for deletion. Was the lens at fault, the camera or me. Well it had to be me not using the equipment properly. I re-assessed my hand held night shoot technique's and I went through the camera menu and made two changes. Being a manual lens the camera cannot obtain focal length information from the lens as the in-camera stabilisation needs to know the focal length of the lens to compensate for it. It was set at 8mm so I turned it onto 9mm although I can’t imagine 1mm making much of a difference and it didn’t when I was shooting in daylight. The other was the Metering Mode which I set on ‘Entire Screen Avg.’ This measures the average brightness over the entire sensor. Down side to this setting on a night shoot is that it increases the ISO but I add negative exposure compensation which then reduces the ISO and also controls highlights in the image. Changes seemed to work as I now have more keepers than deletions. These were taken over several visits before and after Christmas.

Strange what you can find on the London underground as I came across an eggcellent art installation on a disused platform at Gloucester Road tube station. The artwork is called ‘My Name Is Lettie Eggysrub’ by Heather Phillipson and is part of Transport for London Art on the Underground programme for 2018. 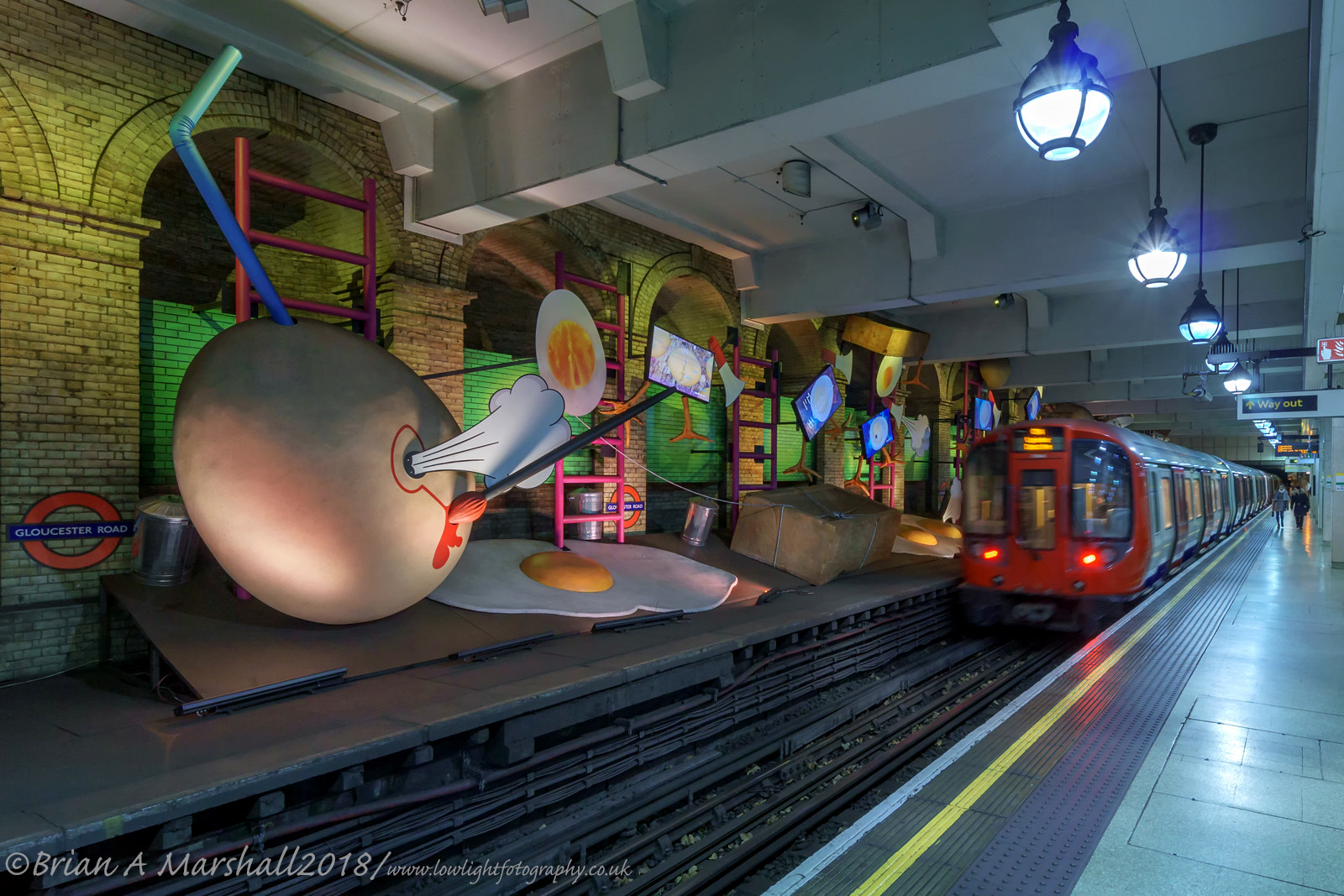 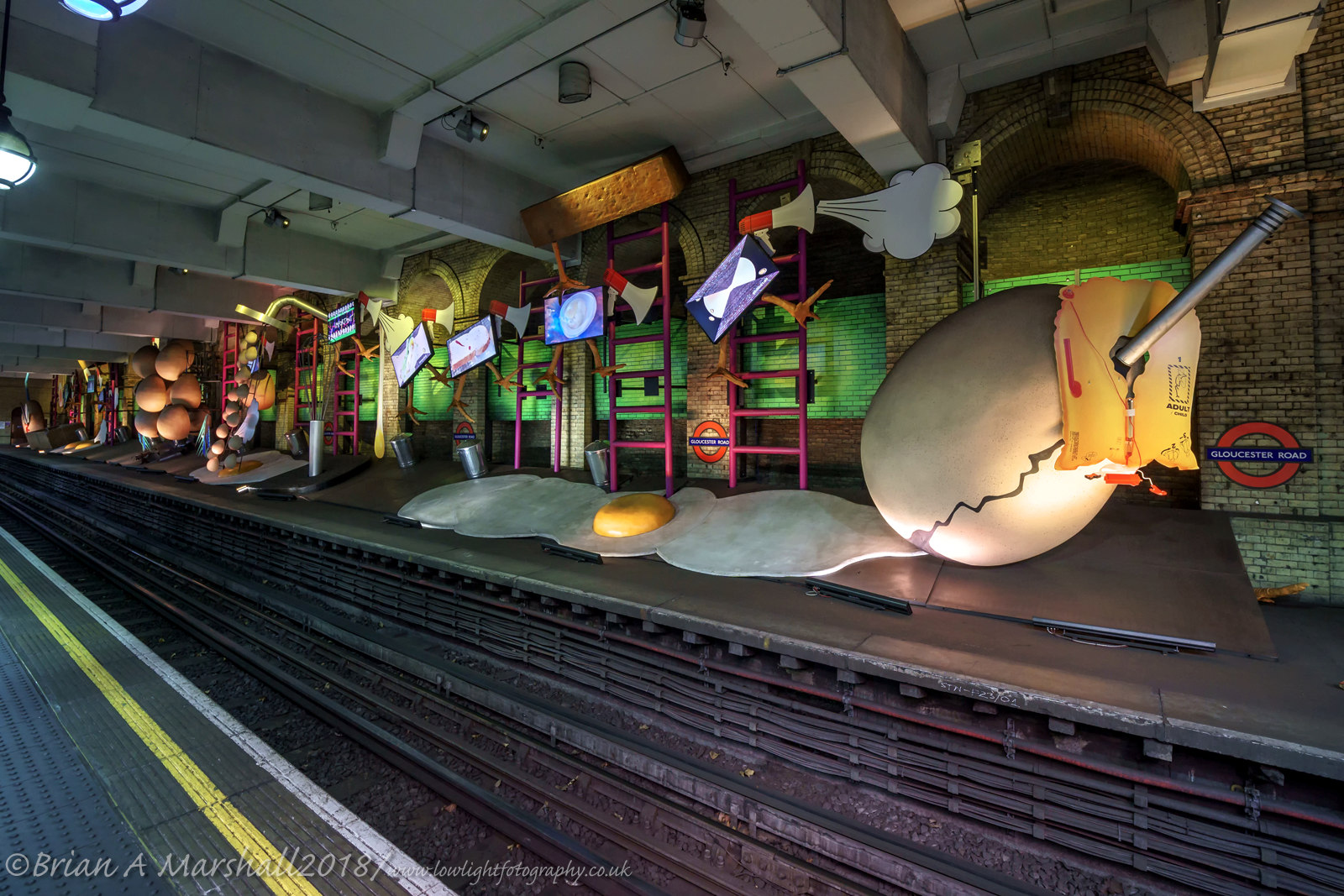 Somerset House, on the Strand, London, have their ice rink in the court yard again for the winter season along with a 40ft Christmas tree sponsored by Fortnum & Mason. The rink is open until the 13th January 2019. 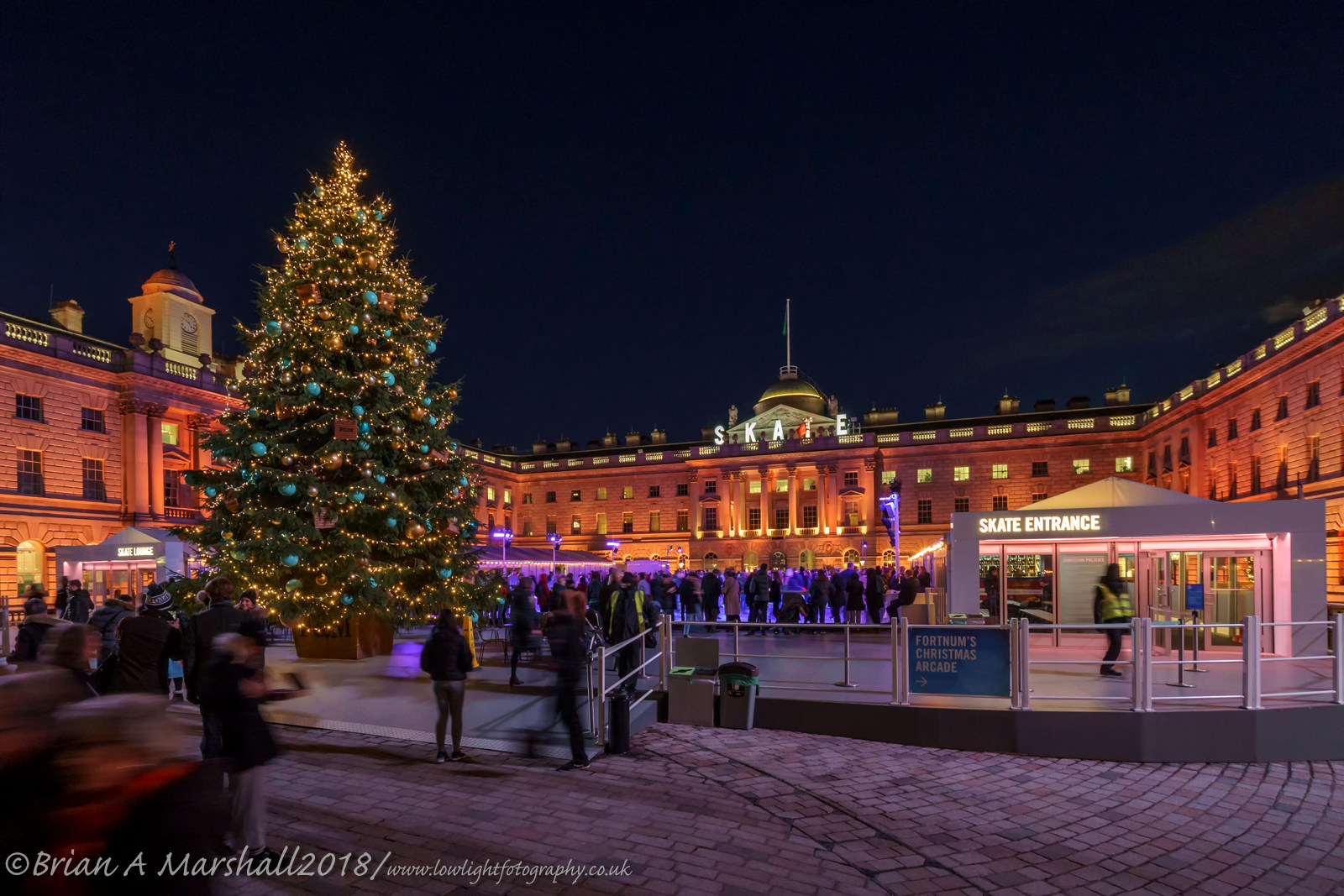 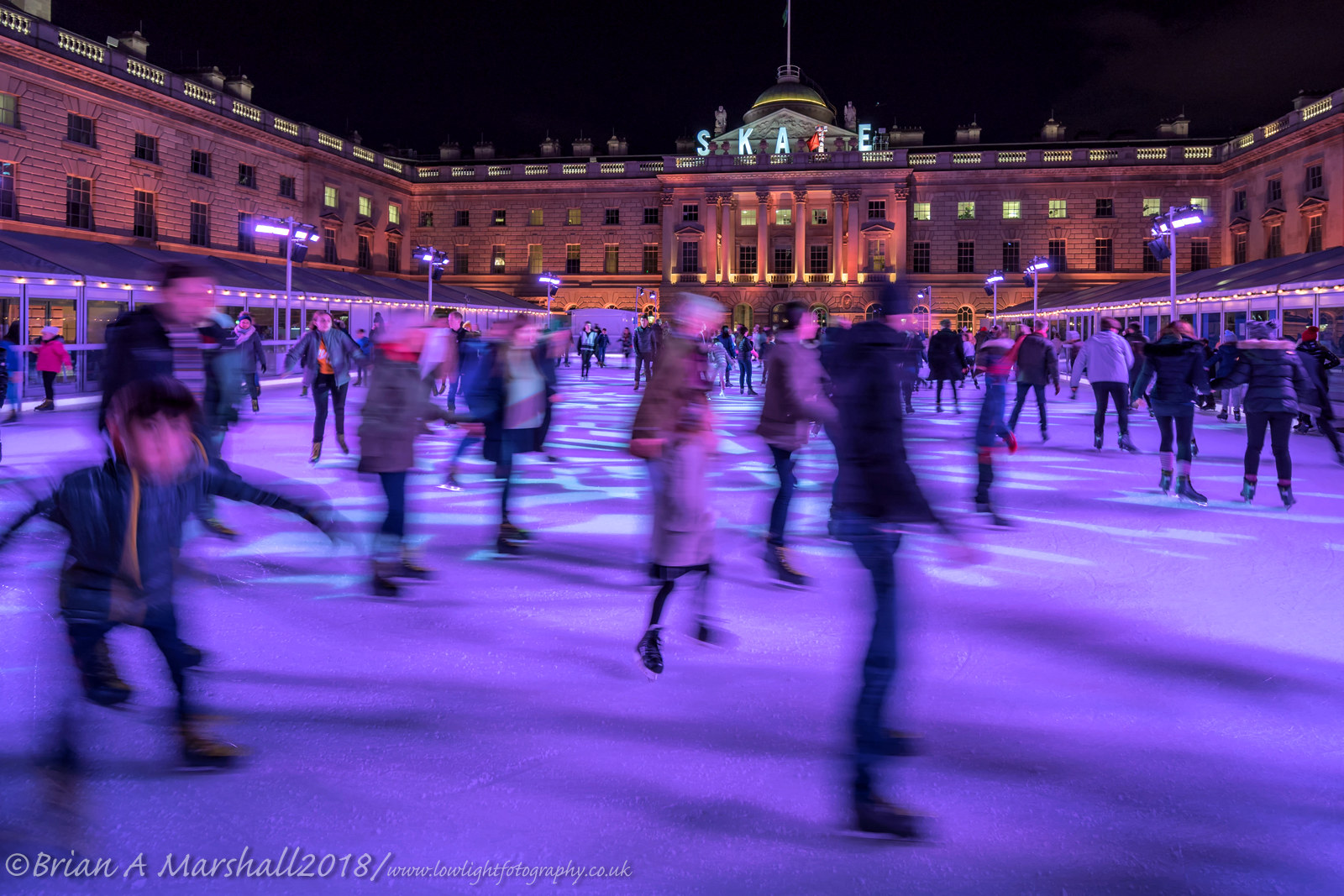 Me.Here.Now. by Mark Titchner 2018 is a public artwork commissioned by Network Rail and on display in a pedestrian walkway at London Bridge Station, consisting of 3 mirrored stainless steel domes suspended from the vaulted ceiling. 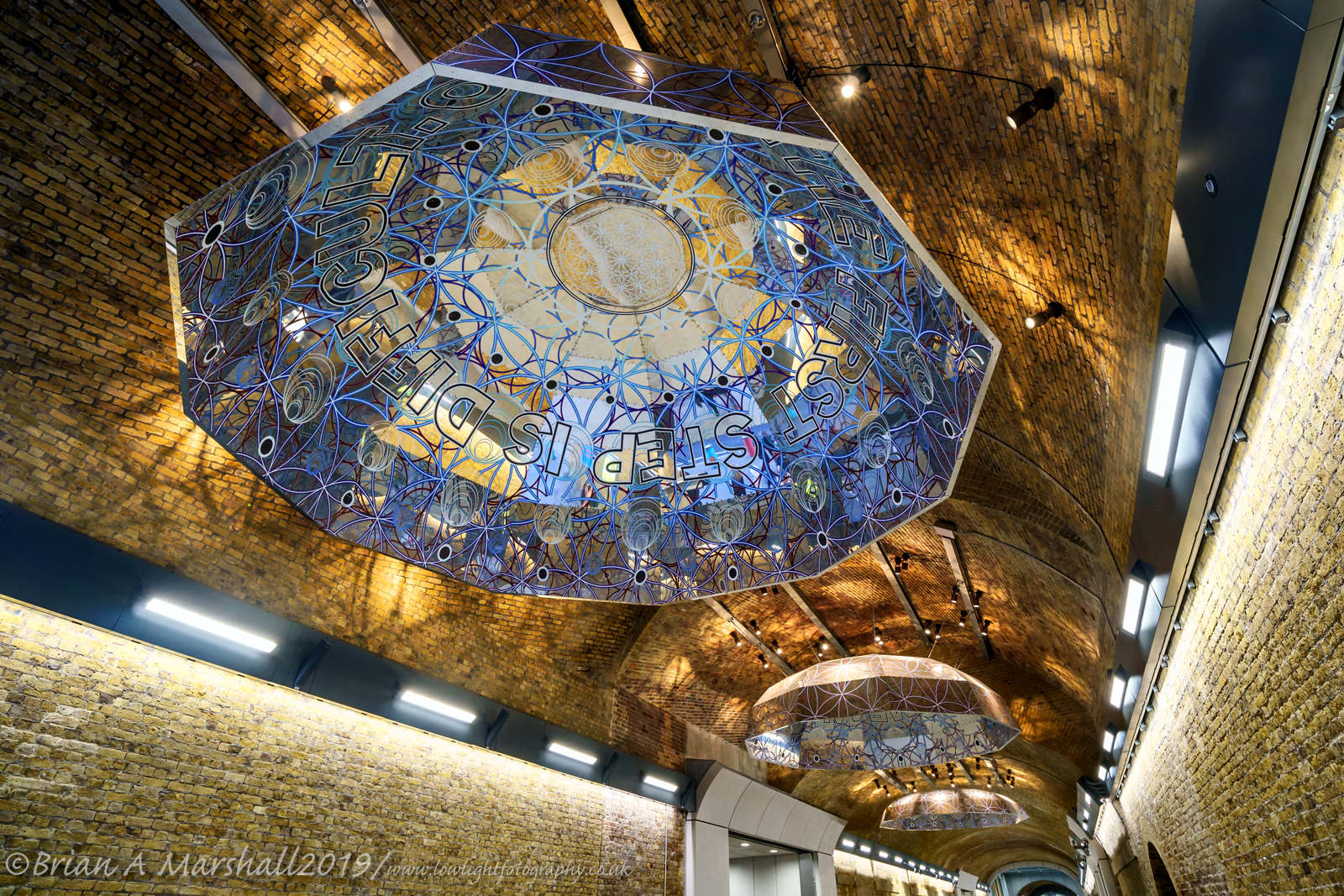 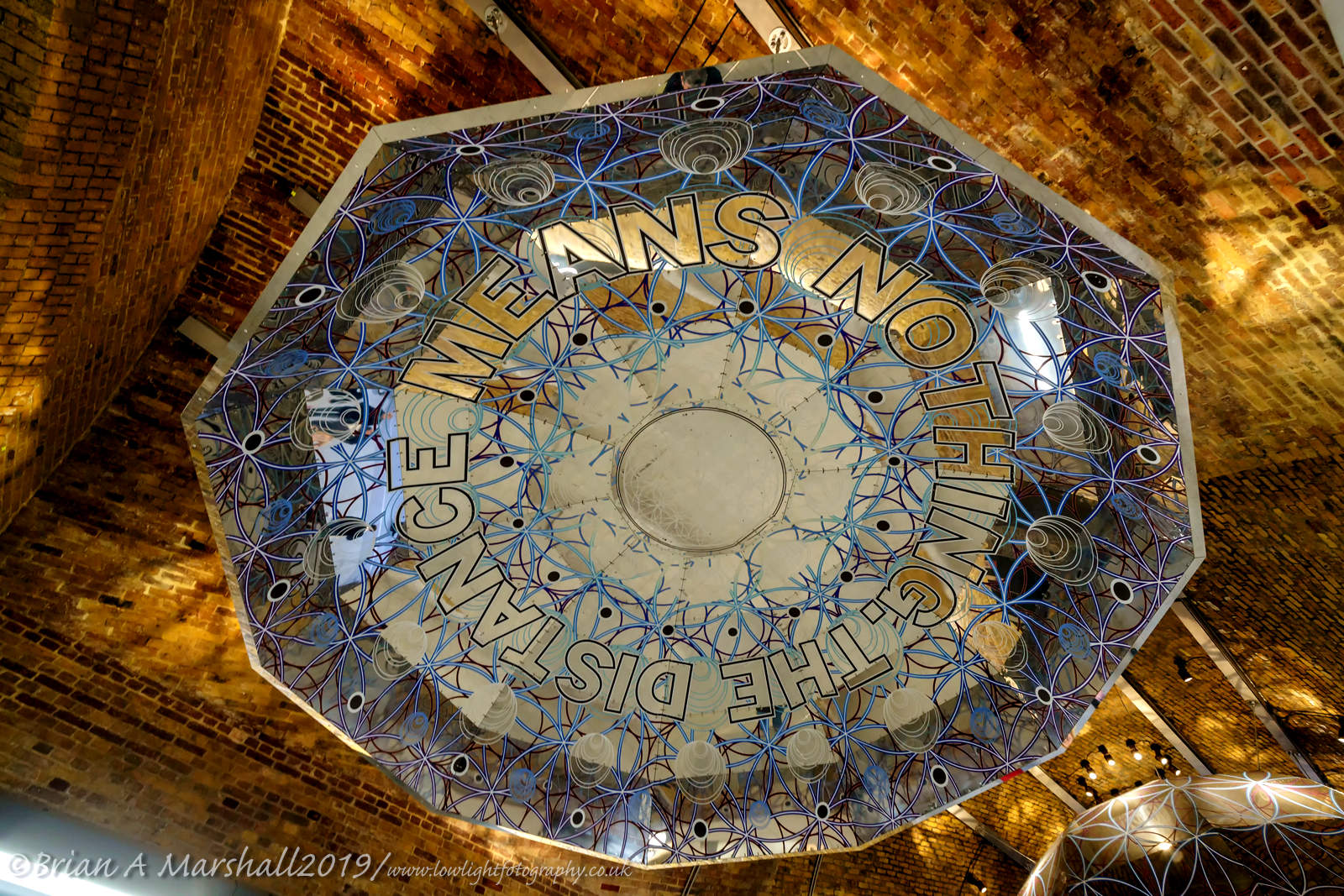 King's Cross Station.The steel lattice metal work of the western concourse quickly gained the nickname of ‘The String Vest’ when it was revealed in March 2012. 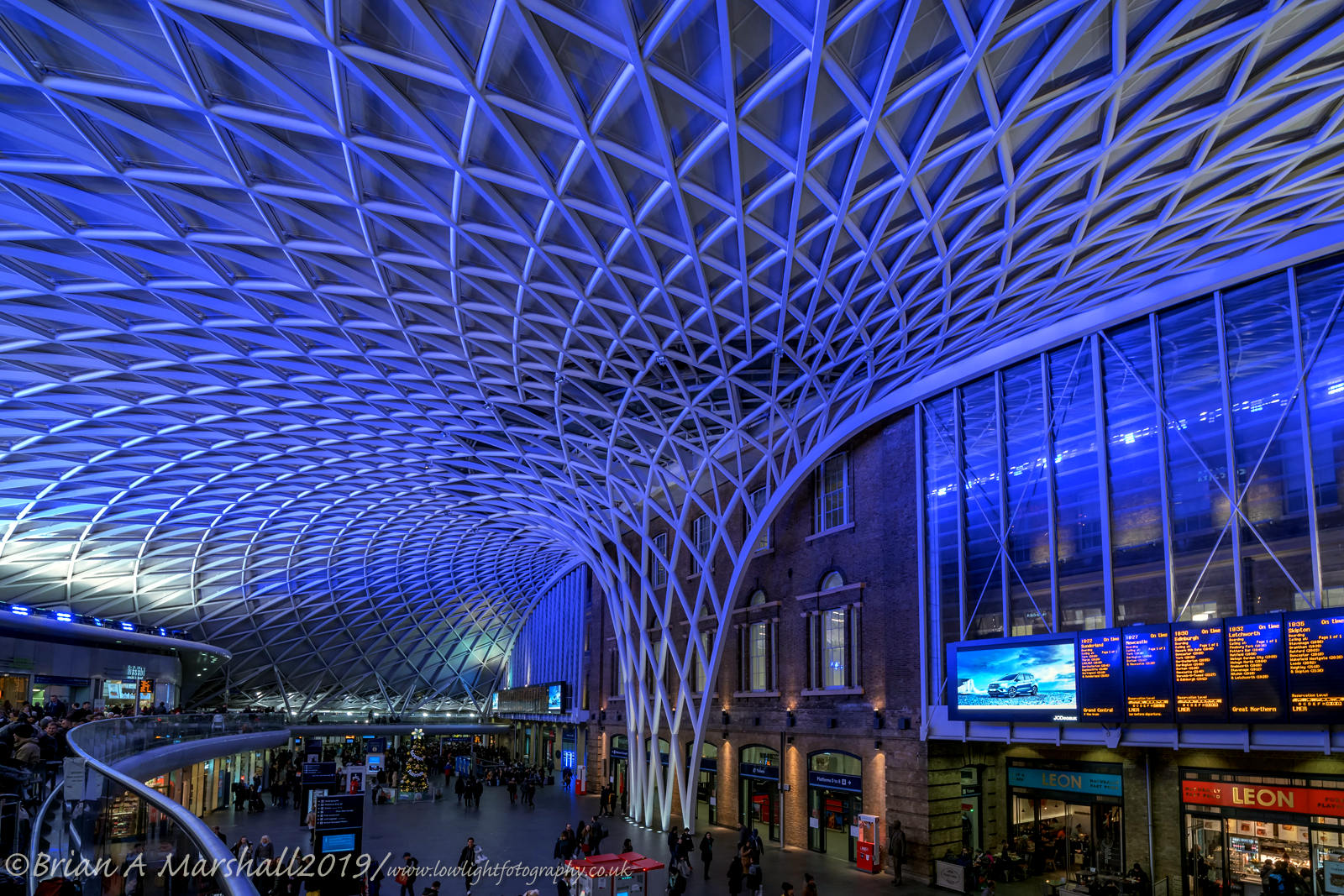 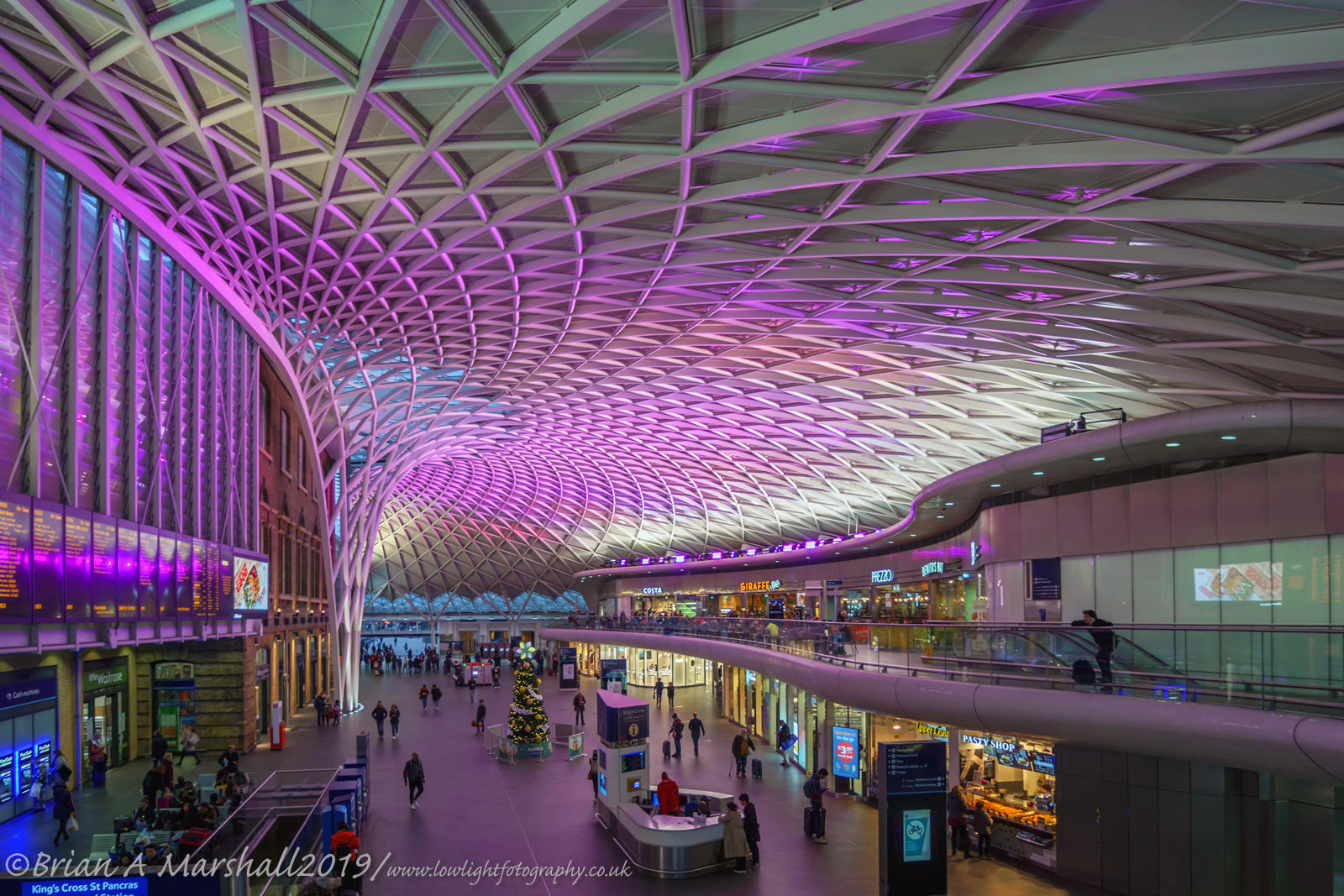 Coal Drops Yard, King’s Cross, London. Built in the 1850’s, Coal Drops Yard had an elevated railway track from which wagons, from the coal fields of Northern England, dropped coal into storage hoppers below from where they were loaded onto horse-drawn carts or into canal barges for distribution around London. After much redevelopment, Coal Hole Drops re-opened on October 2018 as a new shopping and restaurant district of King’s Cross. There is currently a light installation from Studio Meika Meijer. 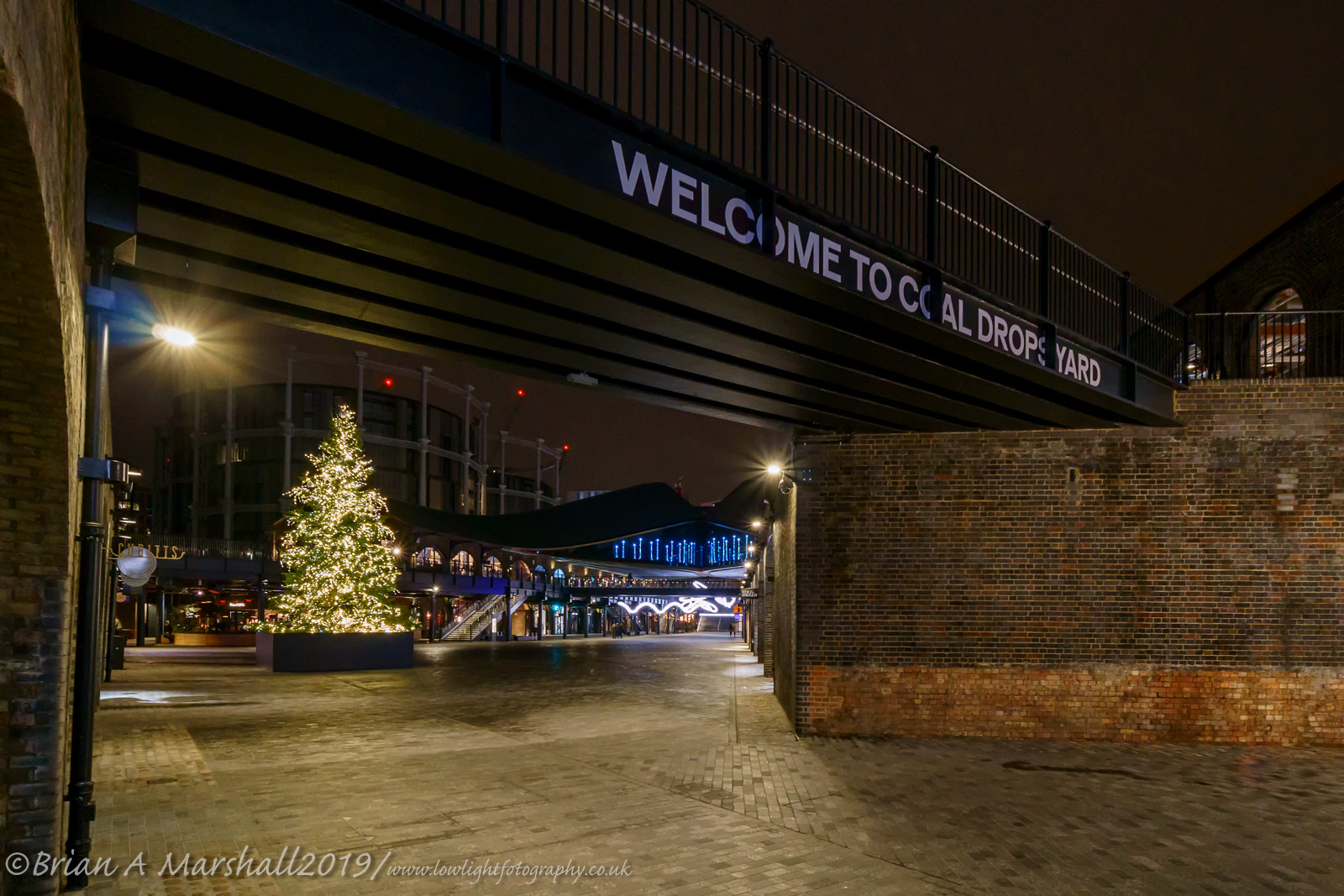 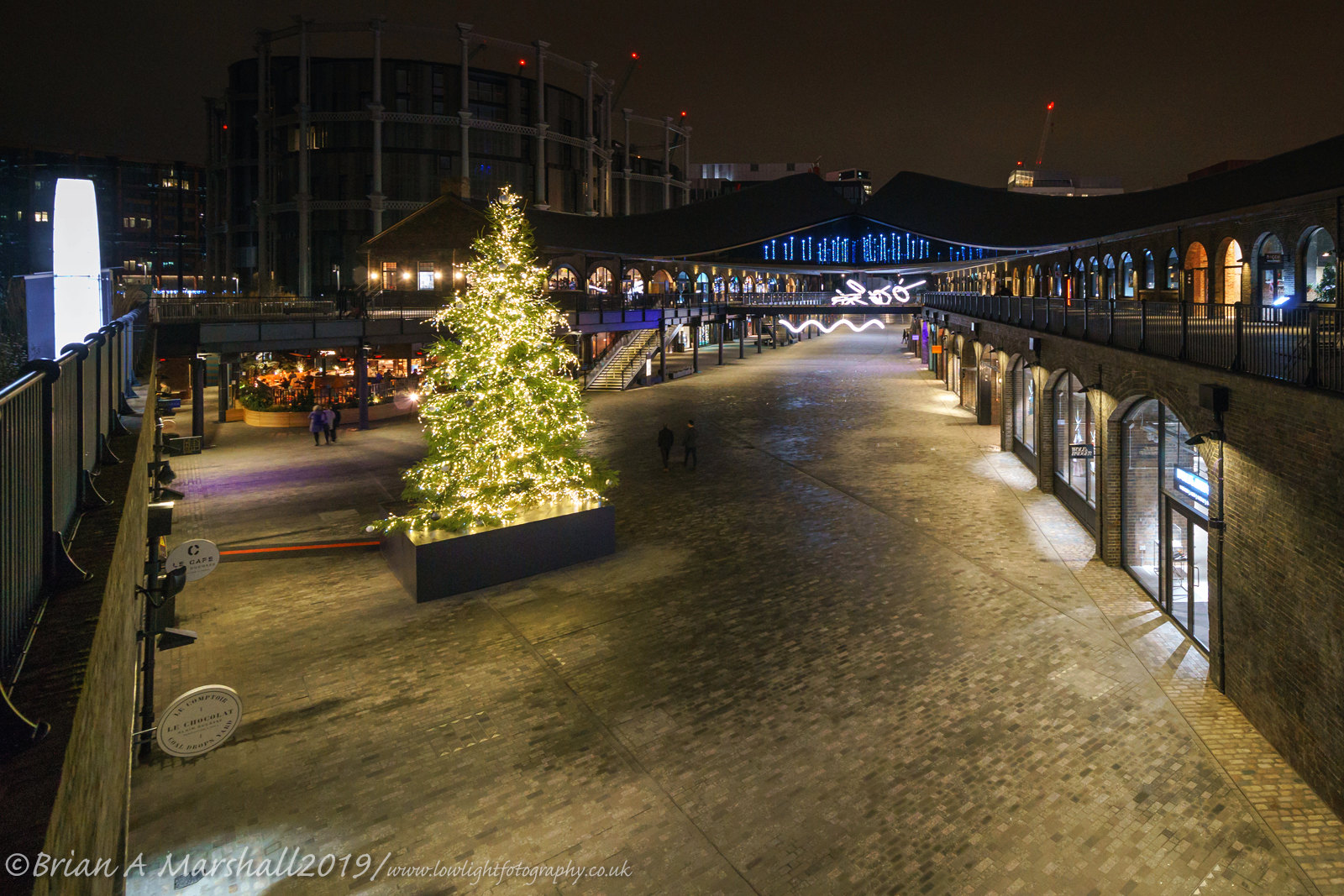 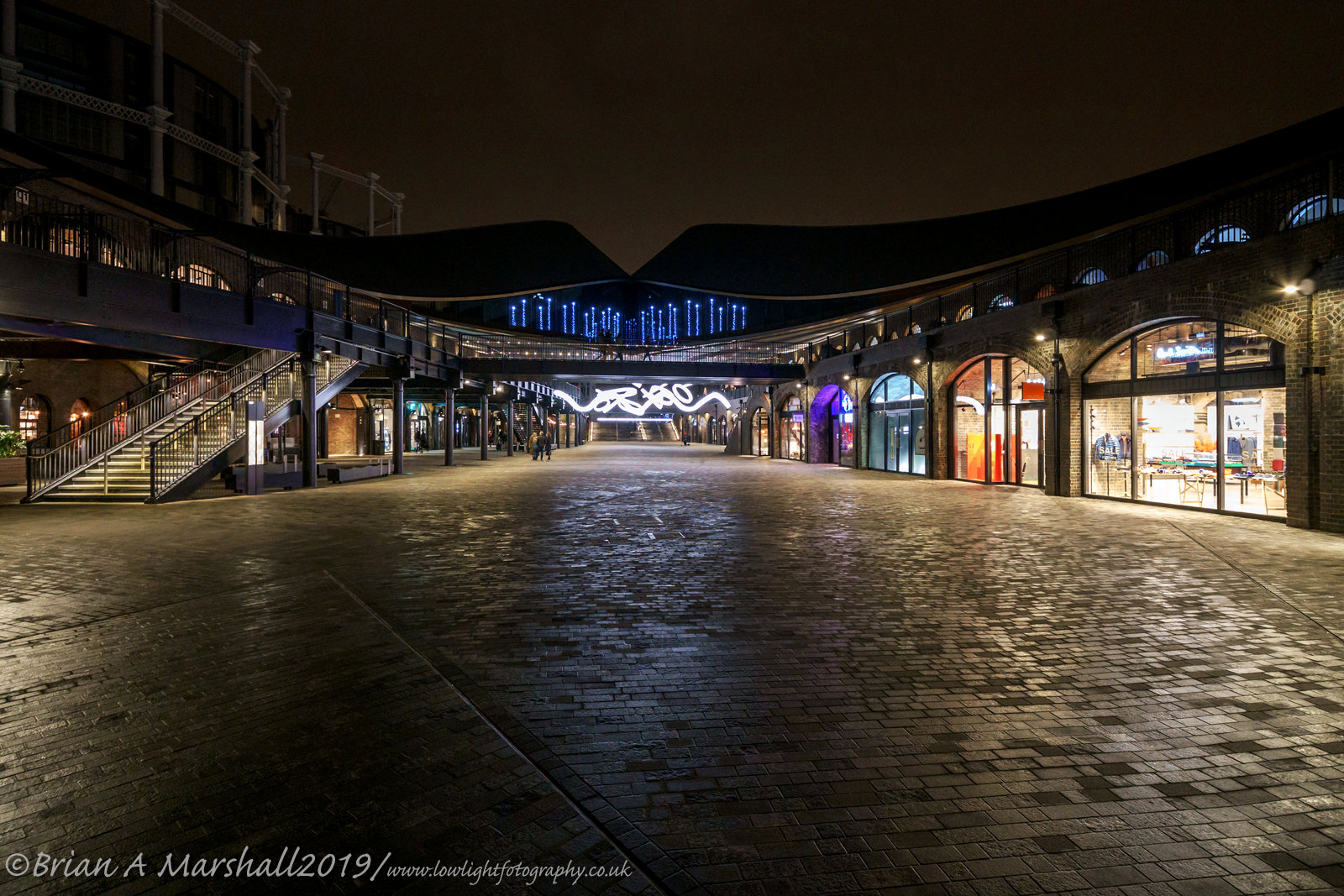 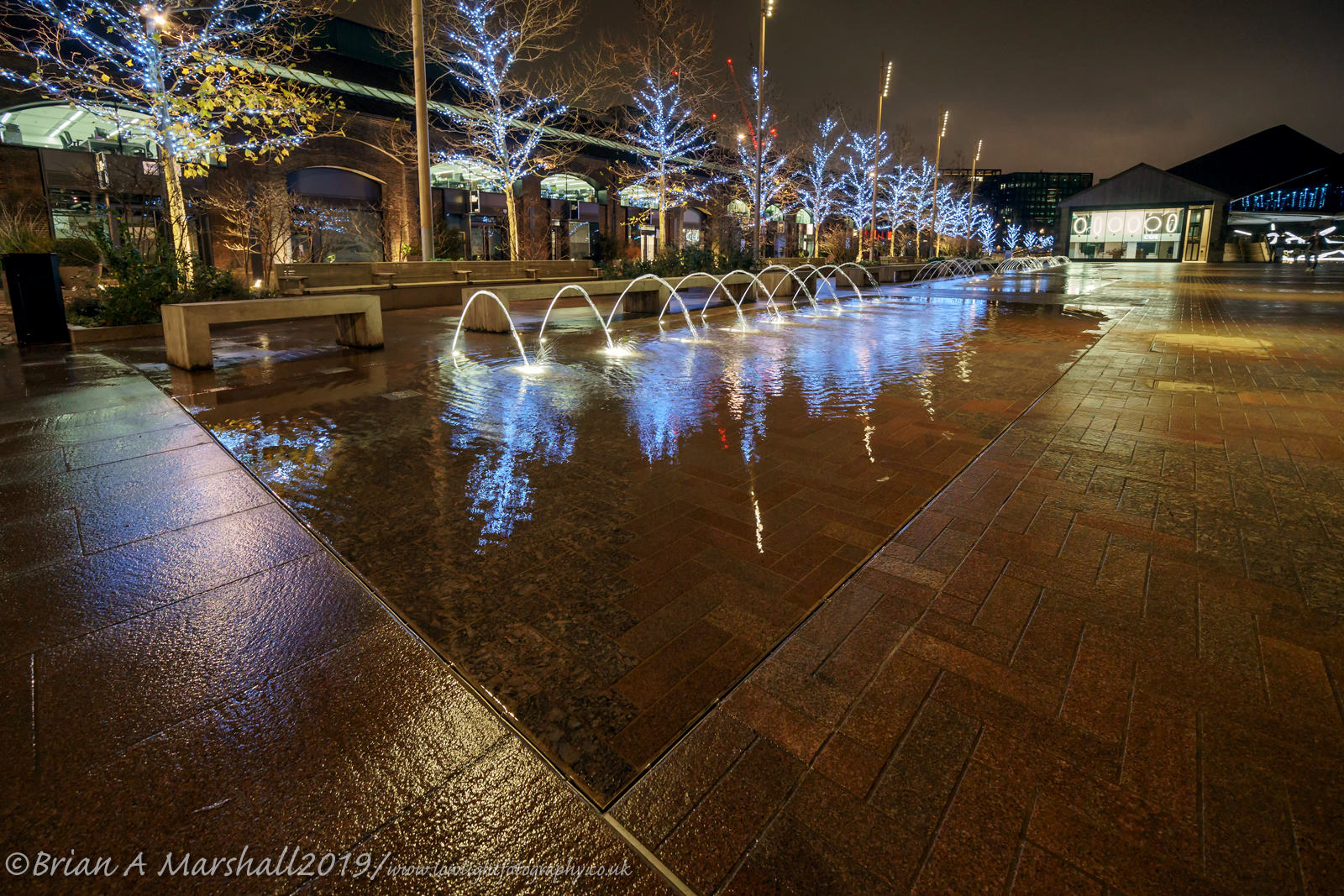 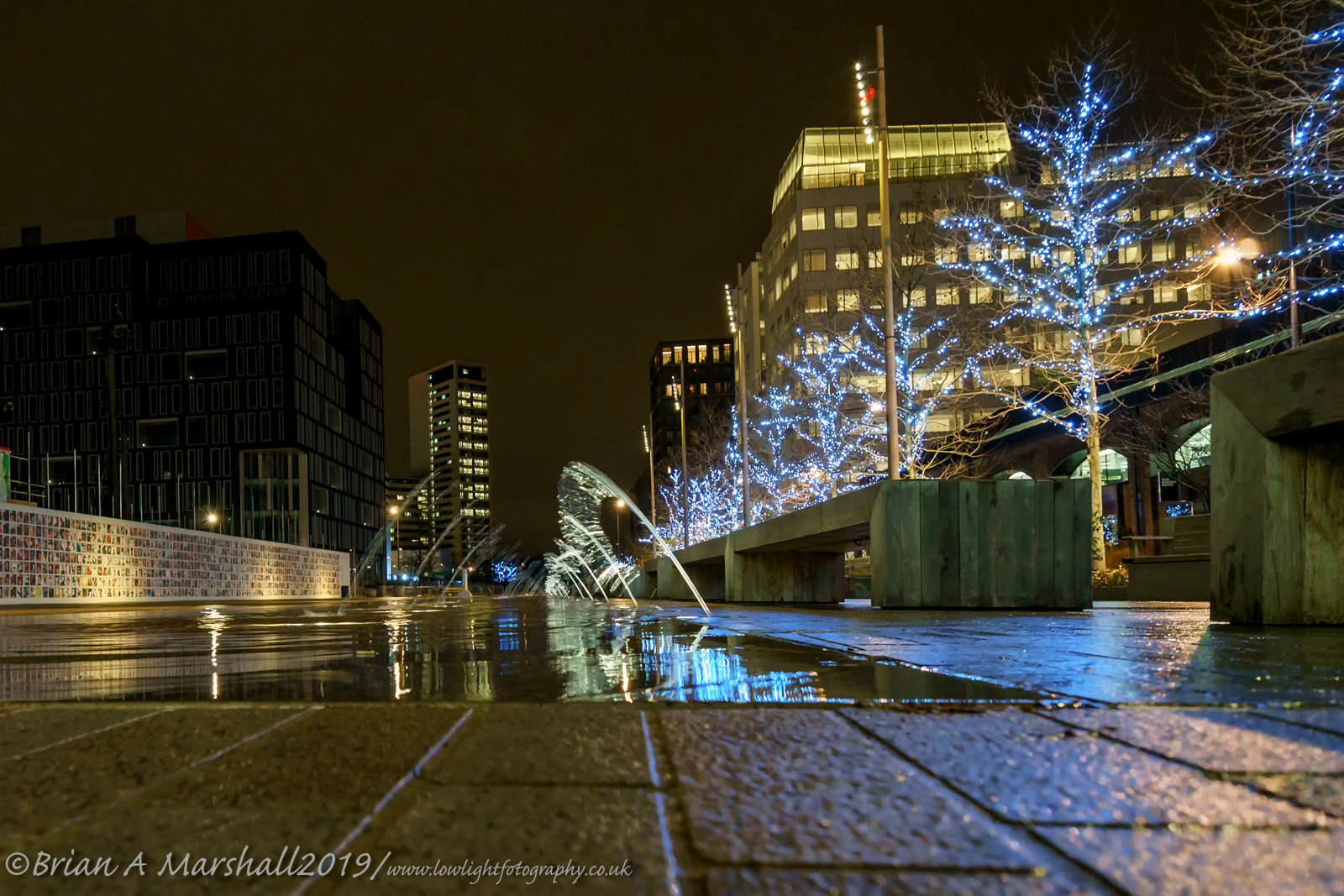 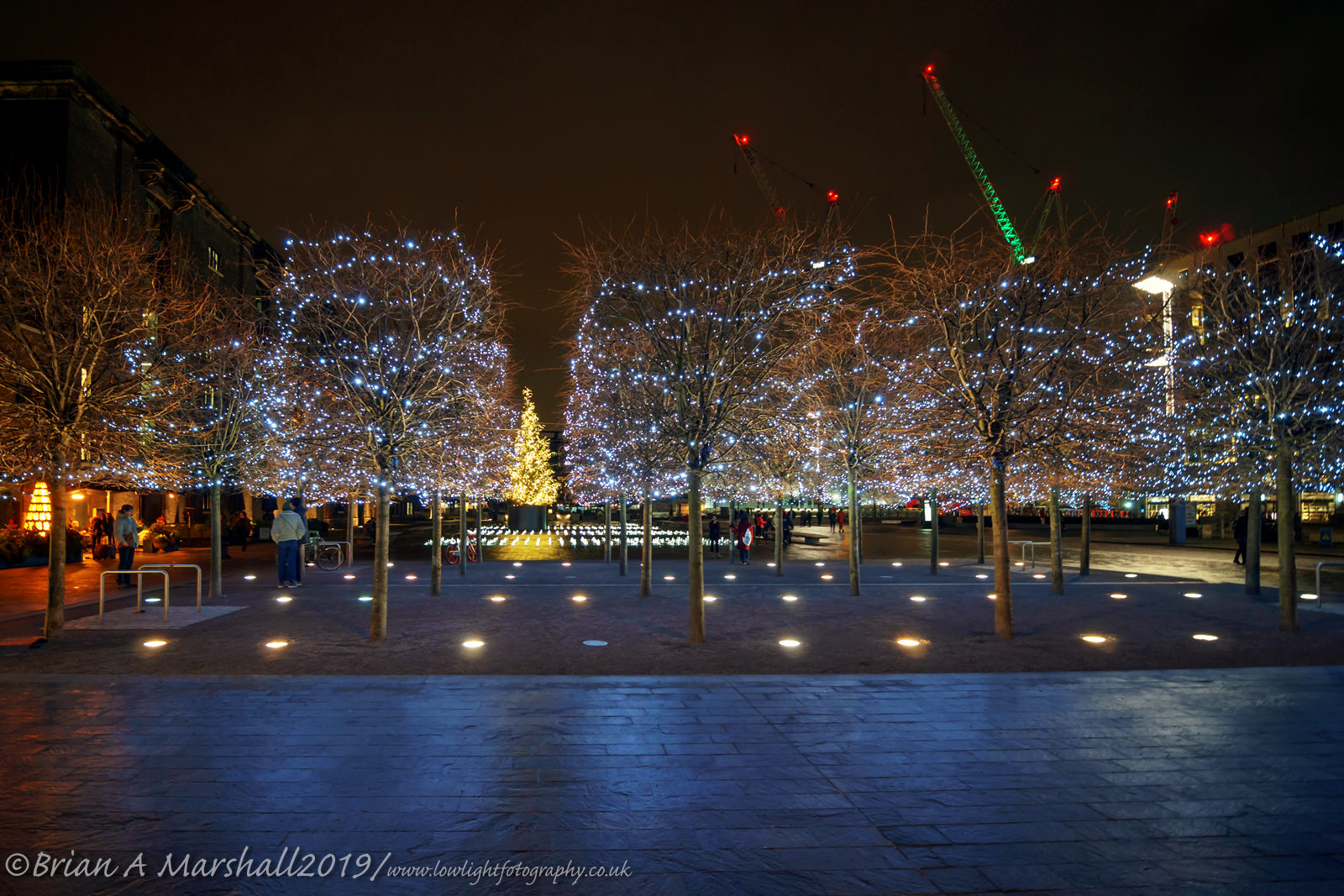 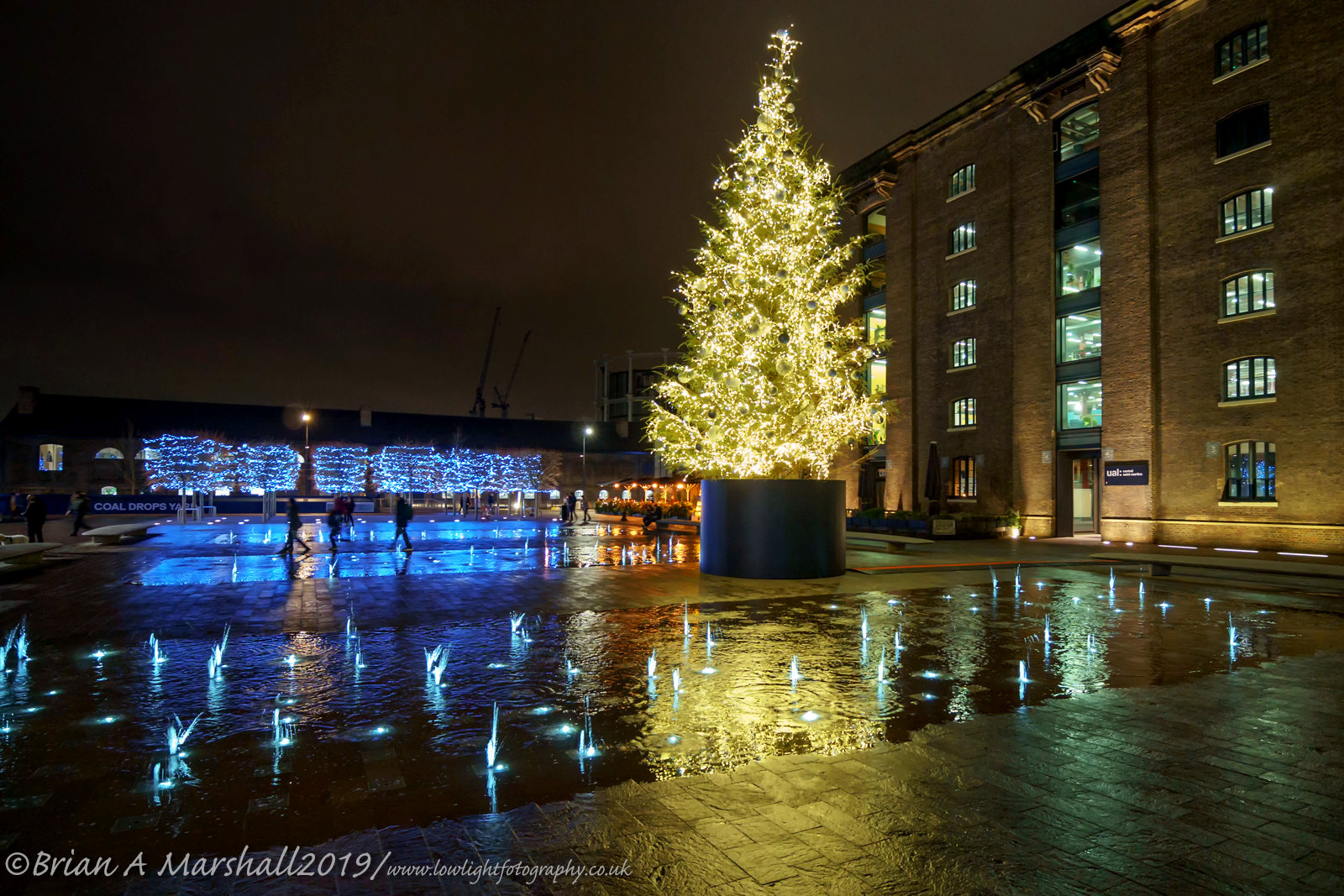 Tattershall Castle was a former passenger ferry now moored on the Thames at Victoria Embankment and is a food and drink establishment. 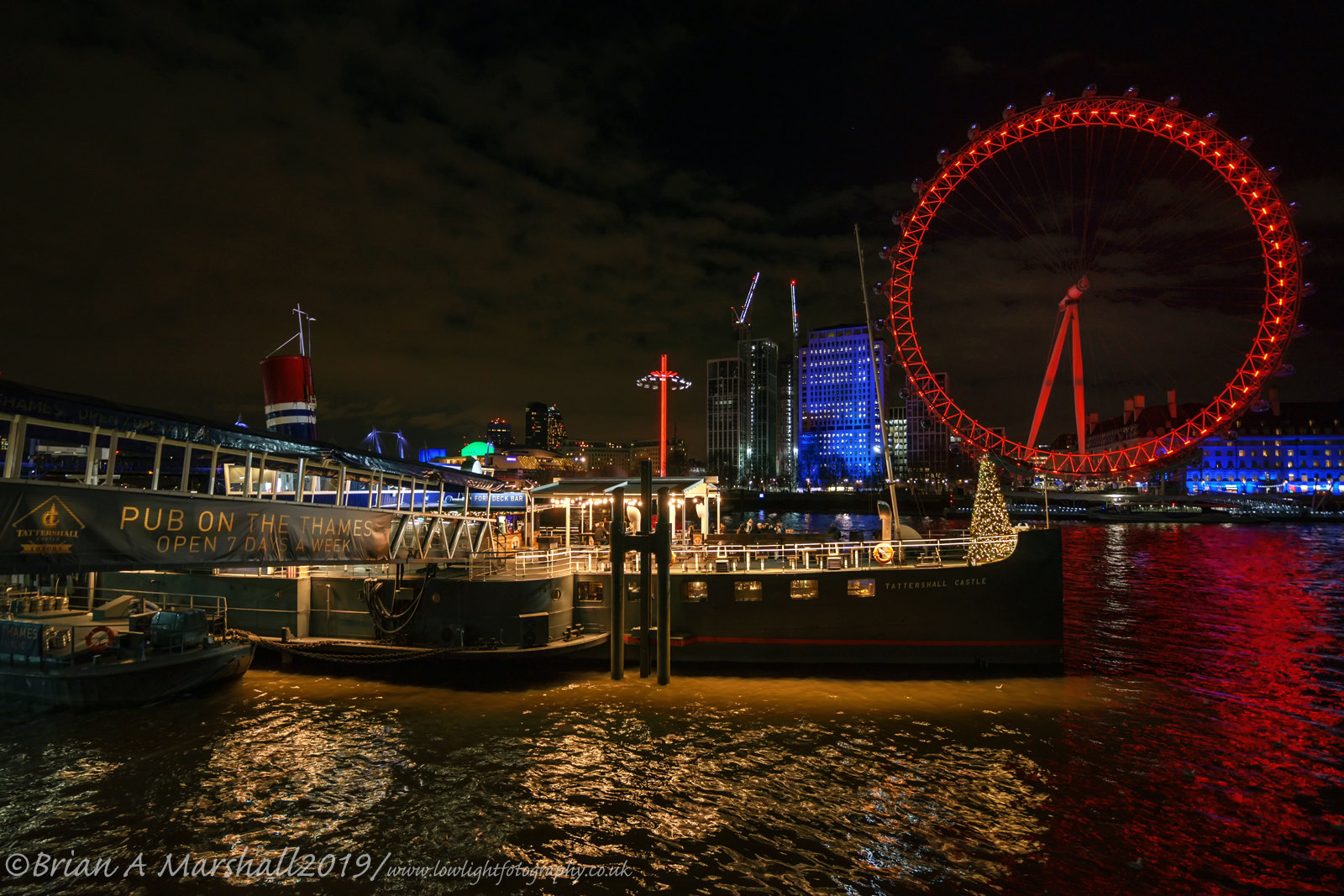 The Lyceum Theatre, the origins of which date back to 1765, is on Wellington street just off the Strand and has been showing the live action musical theatre version of The Lion King since 1999. 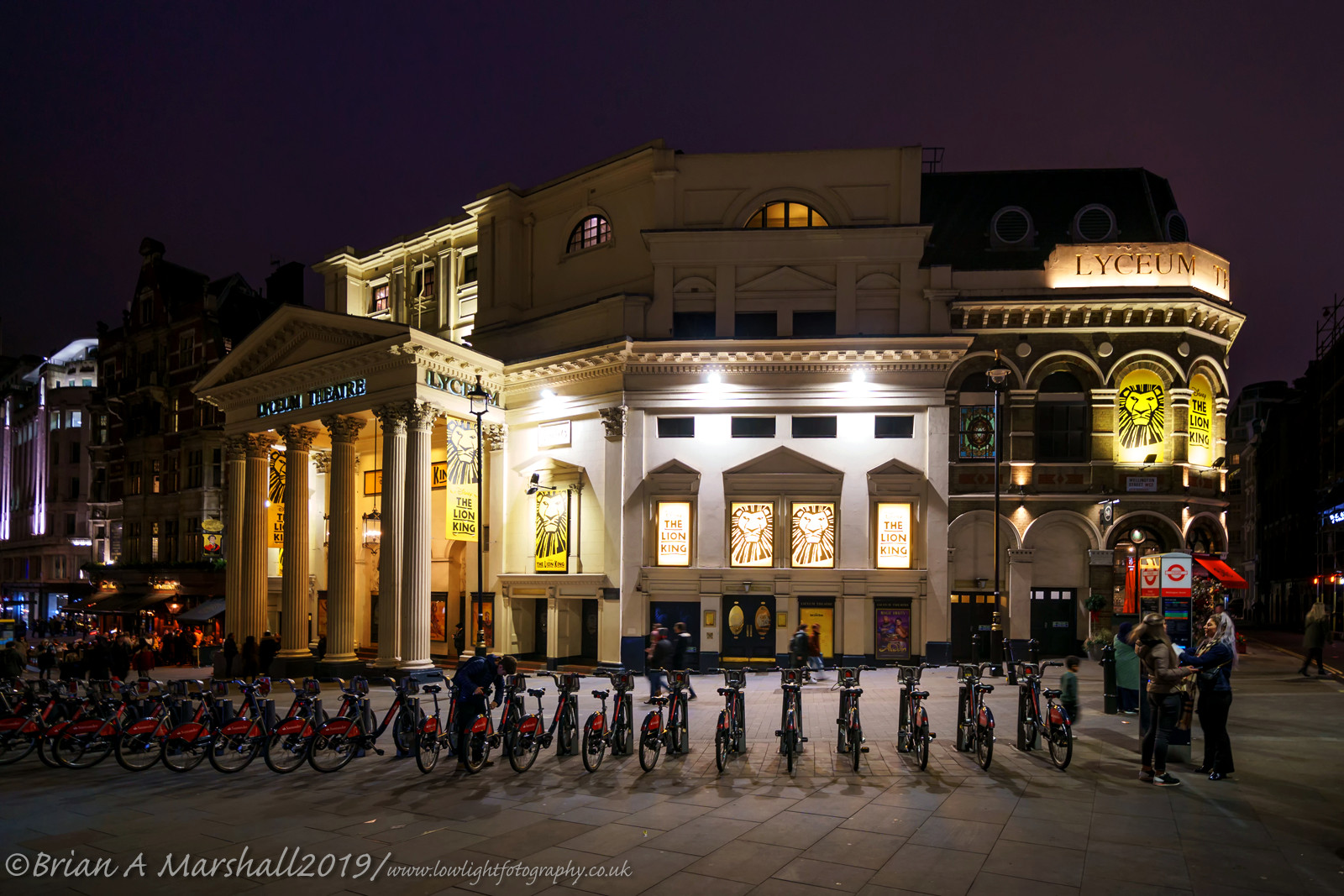 High Commission of India, Aldwych, lit up with 1,700 LED lights. 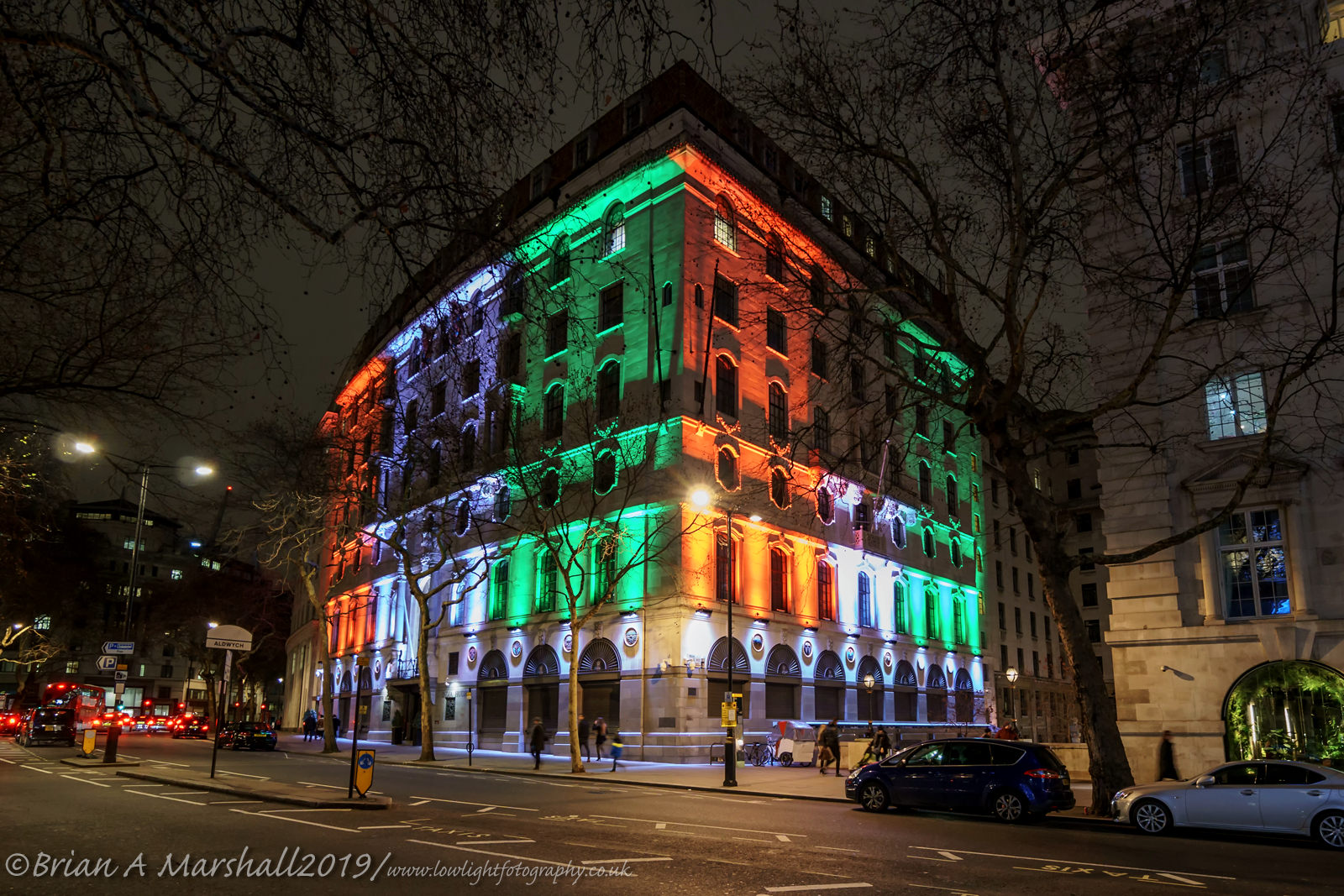 The Tower Lifeboat Station is located on the North Bank of the Thames next to Waterloo Bridge. Somerset House is lit up on the other side of Victoria Embankment. 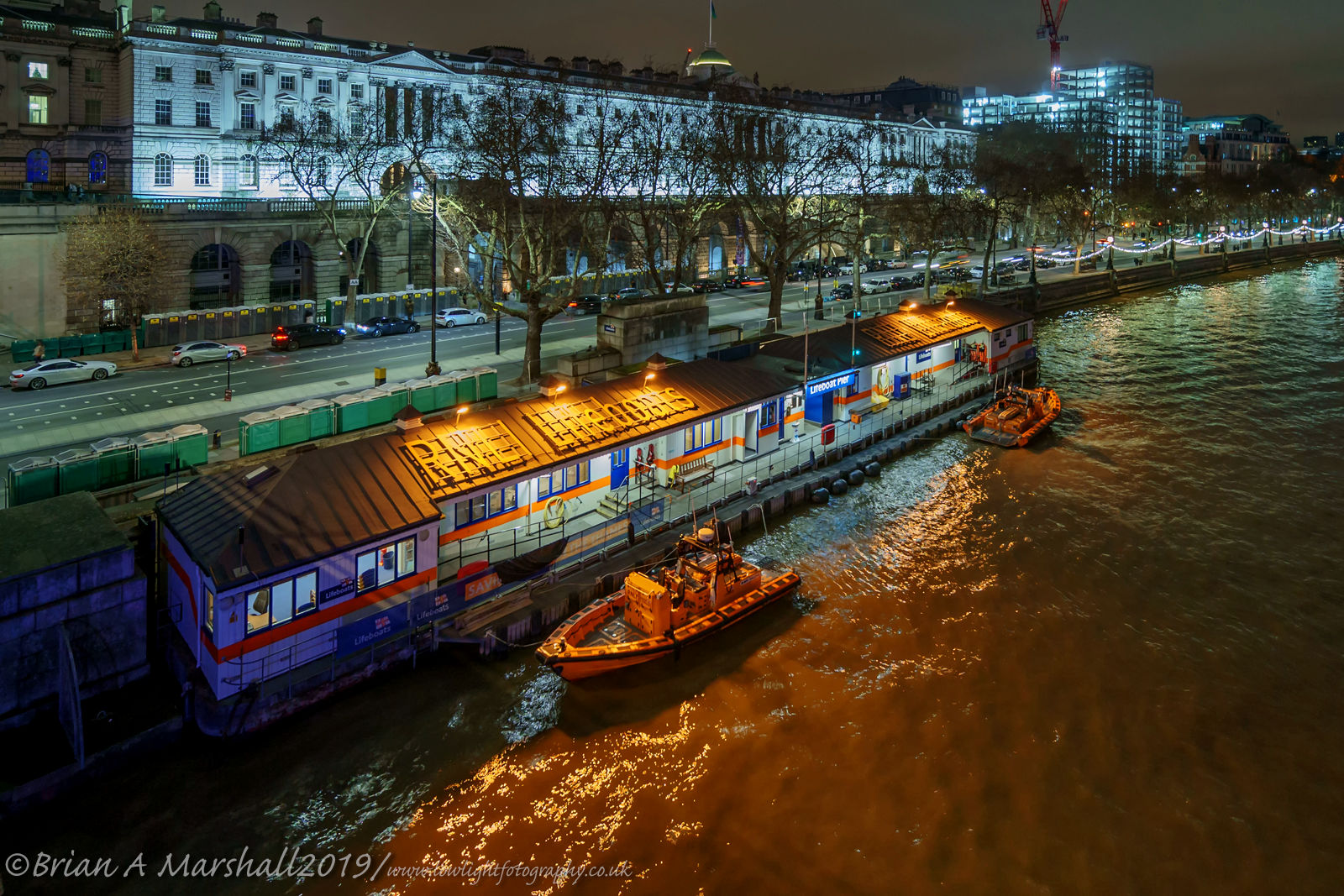 The Odeon BFI IMAX cinema is located in the centre of a roundabout just to the north of Waterloo Station and was opened in May 1999. 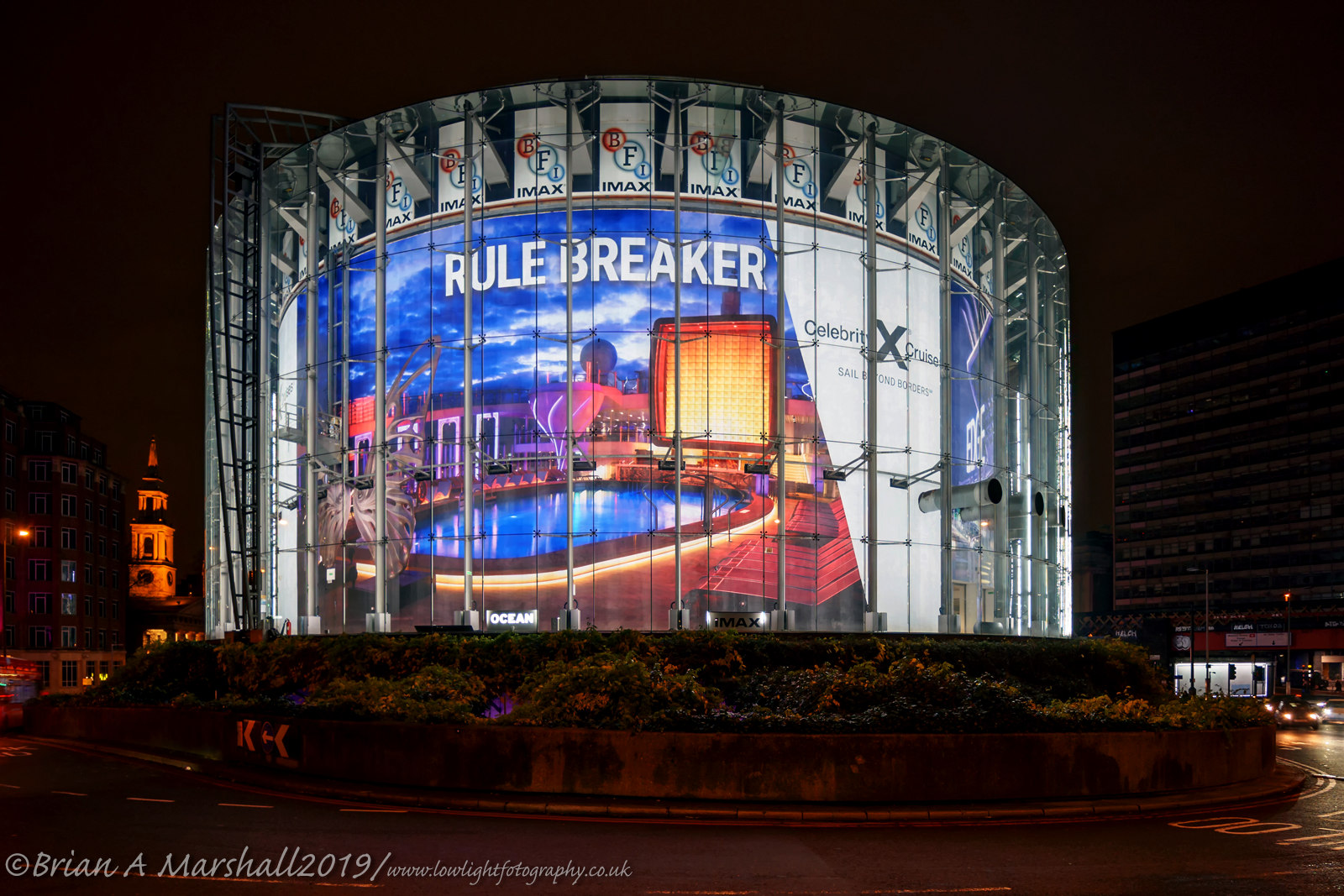 View of the South Bank from Waterloo Bridge. 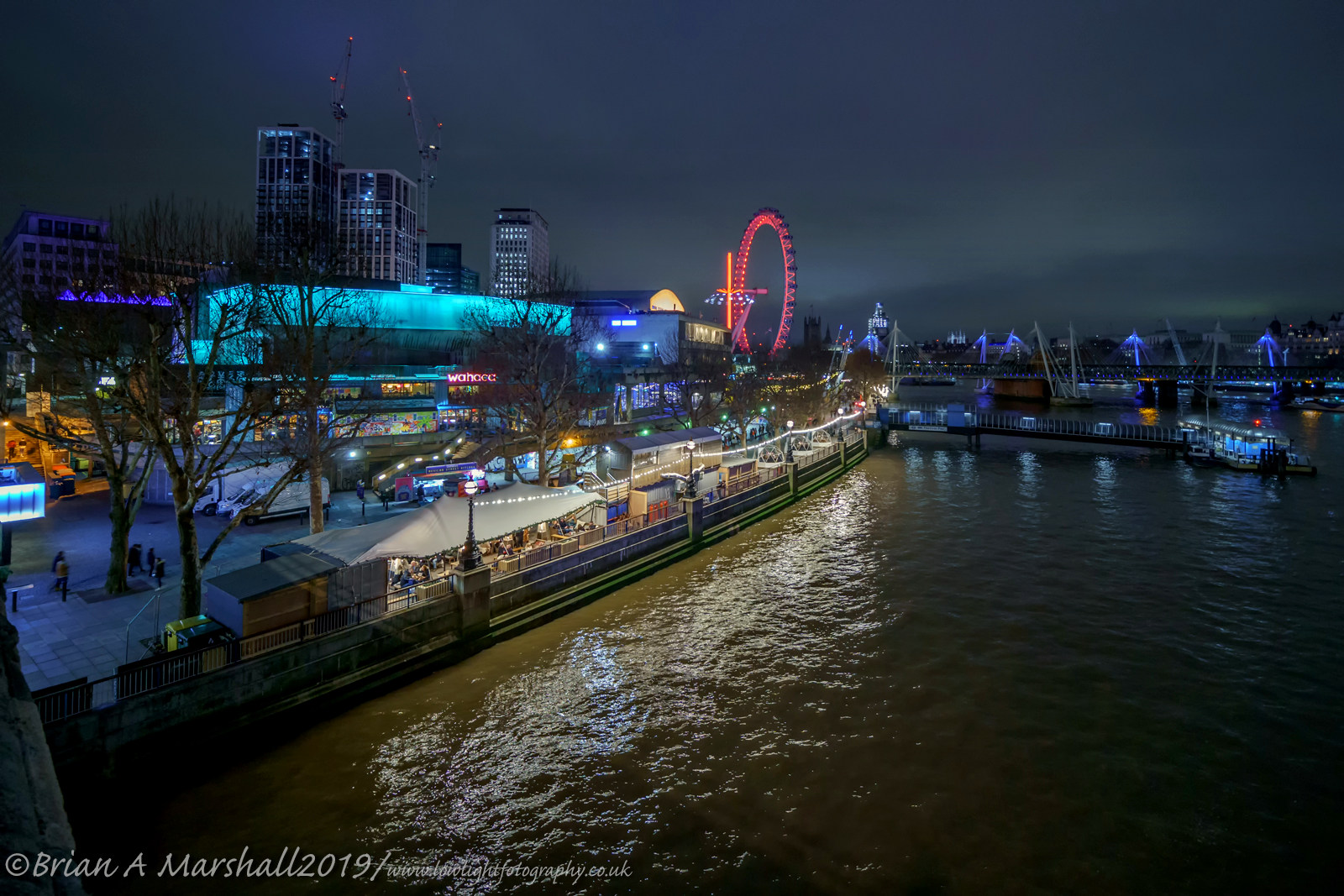 That is a really good set, nicely done